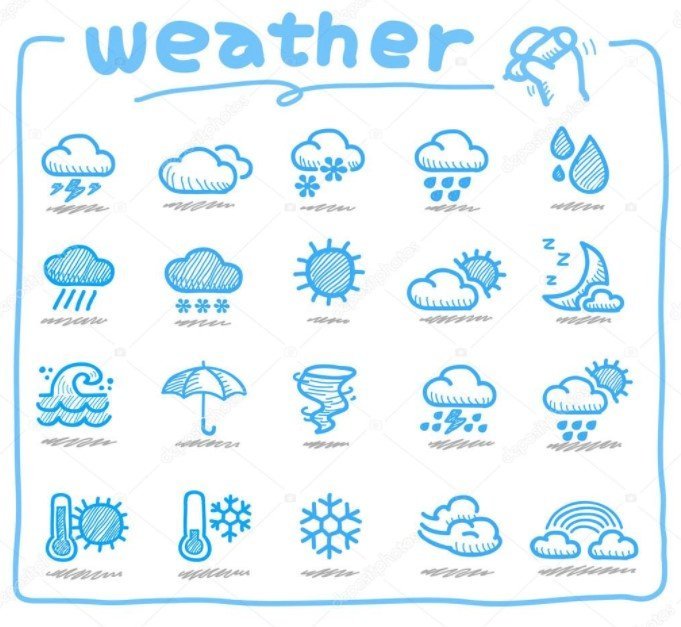 In this section we will learn:

Basic weather terms | If you sat down and listened to strangers meeting and getting to know each other, what would they be talking about?

Most of the time they will be talking about the weather because it is something that we all have in common. There is even an old joke that says “Everyone talks about the weather, but nobody does anything about it!”

When weather becomes subject to study or a hobby, it is good to understand the language that weather scientists, formally called meteorologists use. Meteorology seems like a very complex science, and it is because the weather is something that happens over the whole planet. However, the concepts that every meteorologist or weatherman uses are fairly simple to understand.

In the last section, we learned that water has three physical states, solid ice, liquid water and gaseous water vapor. Humidity is the presence of water vapor in the air. The mix of gases in normal air is usually around 78% nitrogen, 21% oxygen, 1% argon, 0.04% carbon dioxide, and varying amounts of other gases, including water vapor. The normal concentration of water vapor is about 1%, but air can hold more or less water vapor depending on its temperature.

Since air at specific temperatures can hold a certain amount of water, we can measure how much water vapor is in the air compared to how much the air can hold at that temperature. This is called relative humidity.

When the air can hold no more water vapor, we say that it is saturated, or 100% relative humidity. The lower the relative humidity is, the more readily liquid water will evaporate into it, and as water evaporates it takes heat energy with it. When warm air, which can hold a lot of moisture, cools, it may approach the dew point, which is the temperature where the water vapor begins to condense back into liquid.

Precipitate is a fancy word which means to fall.

When the air temperature drops below the dew point, the water vapor begins to condense into water droplets, and the water begins to give up the heat energy it absorbed during evaporation. When this happens up in the sky we see it as clouds, if it is at ground level it is fog or mist.

Mist and fog are classed with precipitation because they form like other types, but the water droplets are so small that they remain suspended in the air rather than falling.

Dew forms on objects on the ground that are at a temperature lower than the dew point of the air. If the object is below the freezing point of water, frost forms. When water vapor in clouds begins to condense, either on dust particles or simply into droplets, the same thing occurs. If the air in the cloud is below the freezing point, ice crystals form. As more water condenses and freezes, the crystal grows until it becomes a snowflake, and when the flake grows too heavy to be supported in the air, it falls to the ground.

Rain forms in two basic ways. The water droplets in a mist or fog collide with each other until they form a drop that is too big to remain suspended and it falls as rain, or a snowflake will go through a layer of warmer air as it is falling; and as the flake melts it becomes a rain drop. Sometimes in a thunderstorm, the flake may begin to fall and partially melt until the winds catch it and carry it higher where it takes on more water and freezes again.

This cycle continues until it is too heavy for the winds to carry back aloft and it falls as hail.

When we talked about water we mentioned the three states of matter, solids, liquids, and gases. Solids are, well, solid, they pretty much hold their shape. Liquids and gases are fluids, which means that they change their shape to suit whatever they are being held in. Gases are much less dense than solids or liquids, which means that there is more room between the molecules of a gas. This means that gas can be compressed, the molecules squeezed together.

Since there is already less room between the molecules of a liquid, a liquid cannot be compressed.

Imagine a cube of air on the ground next to your chair, a foot high, a foot deep and a foot long. Now imagine another cube of air the same size stacked on top of the first one. Once you have the second cube in your imagination, keep stacking the cubic feet of air on top of each other clear up to the sky.

We know that a piece of wood is less dense than water and a rock will be denser, so the wood will rise to the top if you push it down into a bucket of water while the rock sinks to the bottom. In the atmosphere, air with greater density (higher pressure) sinks while less dense (low pressure) air rises. If there is an area of high pressure over your house, you can expect generally fair weather.

A low pressure, however, generally indicates stormy weather. This is because as the air rises through the atmosphere it cools rapidly to the dew point where the moisture in the air gives up the energy it gained during evaporation, and that energy is what drives a storm.

You can demonstrate this by putting a clean glass of water in the freezer for a couple of hours. If you time it just right you can take the glass out of the freezer with the water still in liquid form, but when you give the glass a little shake crystals begin to form and the water freezes into slush. Before it freezes, the water is said to be “supercooled”.

Sometimes you get “superheated” water from a microwave oven, which can be a dangerous situation. When the temperature of water at sea level approaches 212°F the temperature stops rising as the water absorbs enough heat energy to change its physical state from liquid to gas.

Sometimes when you heat water in the microwave using a clean, smooth glass or cup the temperature of the water may exceed the boiling point. As soon as to give the cup a small shake, it suddenly boils which can cause a nasty burn.

Temperature is commonly expressed using either the Fahrenheit scale or the Celsius scale, which can get a little confusing. Most scientists and people in other countries use Celsius, but the weatherman on your local TV station and most of the people you know use Fahrenheit.

Sometimes when you are watching a news report from overseas you may hear the reporter say that it is 22°C, and you are not sure if that means it is hot or cold.

Tip: Most people need a conversion chart or a calculator to convert between the two scales, but here is an easy way to do it in your head. This method is not completely accurate, but it is close enough that you can understand temperature in a conversation.

When you hear a temperature in Celsius, simple double the figure in your head and add 30. The actual conversion formula is to multiply by 1.8 and add 32, but rounding will get you close enough.