If you are interested in weather updates & want to know what measures wind speed then understanding wind speed is valuable. Wind speed determines how soon a storm will arrive and how it affects the creation of high and low-pressure areas. Measuring wind speed is an important factor from piloting a plane to conducting an outdoor athletic activity.

Wind is measured by using the instrument called anemometer. The unit of anemometer is FPM or feet per minute.

An Anemometer has has five basic types. The Mechanical anemometer, Pressure Tube anemometer, Thermal anemometer, Sound Wave anemometer and Doppler Laser Light anemometer. Each type has its own subcategories along with advantages and disadvantages that makes each type an ideal in measuring wind speed for particular situations. We have included photos of each type in case you’re wondering; “what does an anemometer look like?”

This type of anemometer is among the oldest and most popular. How the anemometer works? They operate by simply having the wind push on them. Mechanical Anemometers comes in three types. 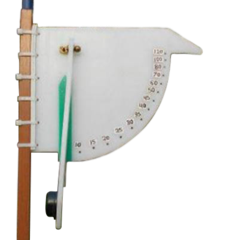 The oldest form of the wind meters, invented by Italian architect Leon Battista Alberti in 1450, uses a plate mounted on a strip of springy metal that faces into the wind. As wind speed increases, the wind speed instrument is bent back with the change in its angle corresponding to wind velocity.

This type is not very accurate and won’t respond to low wind speeds. A variation of this consists of attaching a ping pong ball to a string and determining wind velocity by the angle of the string as the wind pushes the ball. 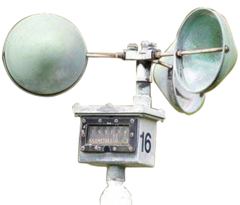 The classic image of four cups rotating around a vertical pole was made possible by inventor Dr John Thomas Romney Robinson in 1845. Originally, the device would measure wind speed by counting the number of cup rotations over a time interval.

This technique was improved by the use of electronics for measuring purposes. Electrical components can either provide greater accuracy in counting rotations per time unit or act as a small generator that creates higher wattage as wind speed increases. 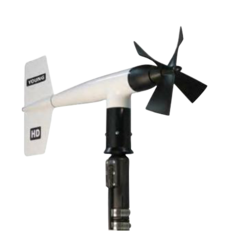 The use of a fan permits wind direction to be simultaneously determined with a vane since the turbine has to be facing into the wind. A handheld wind speed meter using a miniature fan has an advantage over its larger cousin by always facing into even the lightest wind since you’re the one doing the pointing. Because it’s not permanently outdoors, a handheld wind speed meter isn’t threatened by winter icing. Vane anemometers give users choices of units of measurement: m/s, ft/min, km/h, MPH and knots to accommodate different types of applications. 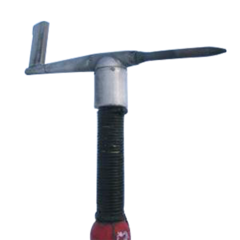 Another very old approach to measure wind speed is through the use of a pressure tube. First developed by James Lind in 1775, the basic idea is to start with a U-shaped tube and bend one end over to create a horizontal section that faces into the wind. Liquid is placed at the bottom of the tube and wind blowing into the horizontal portion forces the liquid up along the vertical section.

Modern versions have replaced the liquid with a flexible membrane that moves in response to the pressure differences while a gauge translates this into wind speed. With no mechanical parts, this instrument that measures wind speed can go for long periods without maintenance. 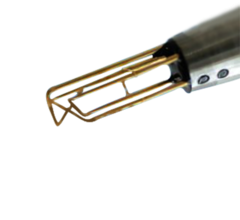 These measuring devices are also known as hot wire anemometers. In this case, you start with the underlying principle that a flowing wind cools things off. The device includes a thermostat that keeps a heated wire at a steady temperature. As the wind blows across the wire, it’s cooled and more electricity is used to bring it back up to its set temperature. The increased draw of electricity is what measures wind speed.

Regarding what tool measures wind speed, there are two answers in this category. 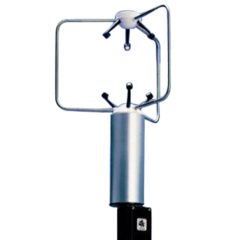 Because sound needs gas molecules to travel through, the speed and direction of them can affect the speed of the sound waves. Ultrasonic anemometers use this phenomenon to calculate wind speed. This type of anemometer compares the travel time between a sound generator and a receiver to what it should be under the circumstances.

The big drawback with what instrument measures wind speed here is that turbulence created by wind flowing around the instrument itself can distort the results. Rainfall can also play havoc with readings. 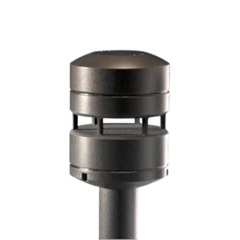 While it also uses sound waves, this kind of wind speed instrument takes a different approach by measuring changes in the frequency of the waves as they collide with passing air molecules. Faster winds will cause the sound waves to compress into a higher frequency. These anemometers are compact and very rugged. On the other hand, this type of wind speed instrument is not that accurate. 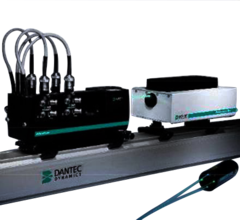 This system relies on the same idea behind the ultrasonic anemometer except that laser light is the one that measures wind speed. The laser beam is split in two. One portion is used for reference while the other is aimed at the wind. If the air is rushing towards the measuring beam, the light waves reflecting off it are squeezed into a higher frequency. This is referred to blue shifting. Laser light bouncing off air particles headed away from the detector undergo red shifting to a lower frequency.

The receiving station compares this reflected light to the reference beam to calculate the speed of the moving air. This instrument to measure wind speed is extremely accurate as well as very expensive. It also requires a lot of technical expertise to operate.

Clearly, there’s a lot of ways to figure out wind speed. Some methods may not be that reliable. Others can be pretty costly and involve unwieldy contraptions. “What tool measures wind speed the best?” in our opinion, comes down to cup anemometers for personal weather stations and handheld anemometers for your more mobile needs due to their affordability, reliability, and durability.

This website uses cookies to improve your experience while you navigate through the website. Out of these, the cookies that are categorized as necessary are stored on your browser as they are essential for the working of basic functionalities of the website. We also use third-party cookies that help us analyze and understand how you use this website. These cookies will be stored in your browser only with your consent. You also have the option to opt-out of these cookies. But opting out of some of these cookies may affect your browsing experience.
Necessary Always Enabled

Any cookies that may not be particularly necessary for the website to function and is used specifically to collect user personal data via analytics, ads, other embedded contents are termed as non-necessary cookies. It is mandatory to procure user consent prior to running these cookies on your website.