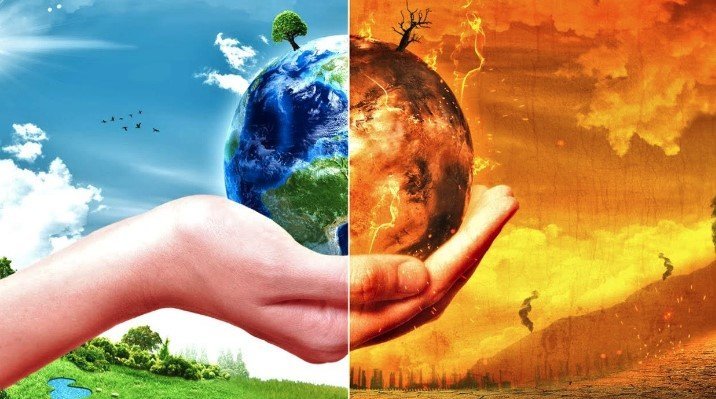 In this chapter we will discuss:

After the TV weather person makes their report and prediction on the local station, many times there will be a short clip about the climate, often with dire warnings of how changes are going to mess everything up and that it is all mankind’s fault. You may have heard people say things like

“The weather is going to be exceptionally hot today, it must be because of global warming” or “We had a really bad winter last year because of climate change”.

These statements can be confusing because weather and climate are related, but they are not the same thing. On the NASA Climate page, it says that

“The difference between Weather and Climate is a measure of time”

and even that is not quite accurate. Comparing weather and climate is not like comparing apples and oranges, nor is it like comparing an orange to a crate full of oranges. It is more like comparing oranges to fruit. In other words, oranges are fruit, and there are many fruits that have a lot in common with oranges, but not all fruit is like an orange. Weather is an important part of climate, and when we classify climates one of the important things to look at is the average weather over an extended period of time. The climate of a certain region is generated by the interaction of five worldwide components:

The most common way of classifying climates is using the Köppen Climate Classifications. The classifications were first published in 1884 and have been modified several times since. They were originally based on the notion that native vegetation is the best expression of climate. The system is divided into five main groups (A, B, C, D, E) and each group is further divided into types. Each climate type may be represented by a 2-4 letter symbol. For example, Miami has an A or Tropical monsoon climate; Denver has a B or Dry Steppe climate with at least one month of average temperatures below freezing, Los Angeles has a C or Mediterranean climate with hot and dry summers dominated by subtropical high-pressure systems, and Chicago has a D or Continental climate with the warmest month averaging greater than 72°F. Group E climates are polar and alpine zones.

The Köppen climate classifications are useful for travelers and geography students as well as those studying weather and climate.

Paleoclimatology is the study of ancient climates and weather patterns before modern record keeping. We know that the worldwide climate has changed many times, just like it is changing now. There are many theories and reasons behind climate change ranging from an “end of the world” scenario caused by pollution and other manmade factors to a natural cycle that would occur no matter what man does.

This is not a forum to debate the various causes of climate change, let alone fix blame. We will just point out that climate change is happening, it has happened before, and species and civilizations who can adapt will survive and thrive. Continue to Weather for Kids Chapter 6: How to become a Meteorologist