Wireless has become an important buzzword in the tech community over the past couple of decades. One of the first critical wireless devices was the home or office landline telephone handset. The user had the option to take the phone away from the base station and still be able to communicate. But, why do you need to check out a cabled weather station?

Of course, the rise of cellular technology has caused us to wonder if the wired phone in any form is doomed. In telephones, there may be a small backlash against wireless handsets. The market has recently seen an upswing in sales of desktop office phones designed to connect with cellular networks. As it turns out, in an office setting, many people are just more comfortable using a corded handset.

Is Wireless Always the Best Answer?

This brings into question whether wireless is the best thing for other technologies, especially home weather stations. A wireless connection between the station’s sensor suite and the base station has some very definite advantages. However, wireless technology comes with some disadvantages. These may even outweigh the advantages and make you choose a cabled weather station.

For most applications, the significant benefit of wireless technology is portability. The home or office WiFi connection, to smartphones, tablet computers and laptops allow the devices to connect to the network from anywhere there is a signal. However, the convenience of portability may come at the cost of decreased security.

WiFi networks have been notoriously accessible for outsiders to gather data from. These days, there are simple encryption techniques to mitigate this danger.

There is much less of a security issue circling the data being transmitted by a wireless weather station. Weather stations use unique transmission frequencies, which are separate from WiFi. Indeed, weather data is not that sensitive.

Some base units have a provision for WiFi connection. This is for sharing data with the network, not between the sensors and the base. Portability is a less important issue for a weather station base unit.

Generally, it will be in a fixed location, and the user will come to it or access the information via WiFi on a smartphone or computer.

Wireless Weather Stations – Set It and Forget It Convenience

Ease of installation is the most significant selling point for a wireless weather station. Once the sensor suite in place appropriately (high enough to avoid disturbance from buildings and trees, away from obstructions), it is merely a matter of placing the base station where it will receive the signal from the sensors.

The rated range for most wireless sensor transmitters is generally 300 to 1000 feet (100 – 300 meters), so finding good reception should not be a problem, although some forms of house and building construction may cause interference. This is primarily only a problem in metal and metal reinforced buildings.

Wireless technology adds a level of sophistication and expense to the weather station.

For many users, the only notable difference between a wireless and a cabled weather station is the price, wired connections are generally much less expensive, especially when ordering internationally. This is because each wireless setup needs to conform to the regulations in each country.

The FCC regulates radio frequencies in the USA; other countries will have their regulating bodies and rules. Since a wired weather station does not broadcast across radio waves, a system ordered in one country ships to another without a problem.

After the cost savings of a cabled weather station, the biggest advantage to a cable connection is freedom from radio frequency interference. Cell phones have been known to interfere with audio devices, and how many times has a household appliance like a blender or a vacuum cleaner interfered with a TV or WiFi transmission? Once the base station has recognized the wireless sensor suite RF interference episodes are likely to be transitory and short in duration, but they can happen.

Any cost savings from the purchase of a wired weather station may be negated by installation costs.

The project is not beyond the capacity of the average home handy person, but the data cable will have to come through at least the outside wall of the home. This project is possible with the same tools and materials used for a TV cable installation, but some homeowners will be more comfortable hiring a professional to drill the hole and seal the wire after installation.

The range of the wired connection is limited by the length of cable purchased. In practicality, a suspended wire is subject to wind damage as well as UV exposure. If the sensor suite is mounted on a mast some distance away from the house, consider burying the cable (using underground conduit). The cable should be firmly anchored to the pole and the outside walls of the house using nylon cable ties and clamps.

The last advantage of a wireless weather station has to do with your needs and involvement in the weather watching hobby. Some of the more sophisticated systems offer expansion and upgrades. A wireless network can generally be used with more than one wireless base station, and some manufacturers provide additional sensors such as soil moisture sensors and leaf-wetness meters, which may not be compatible with wired stations. 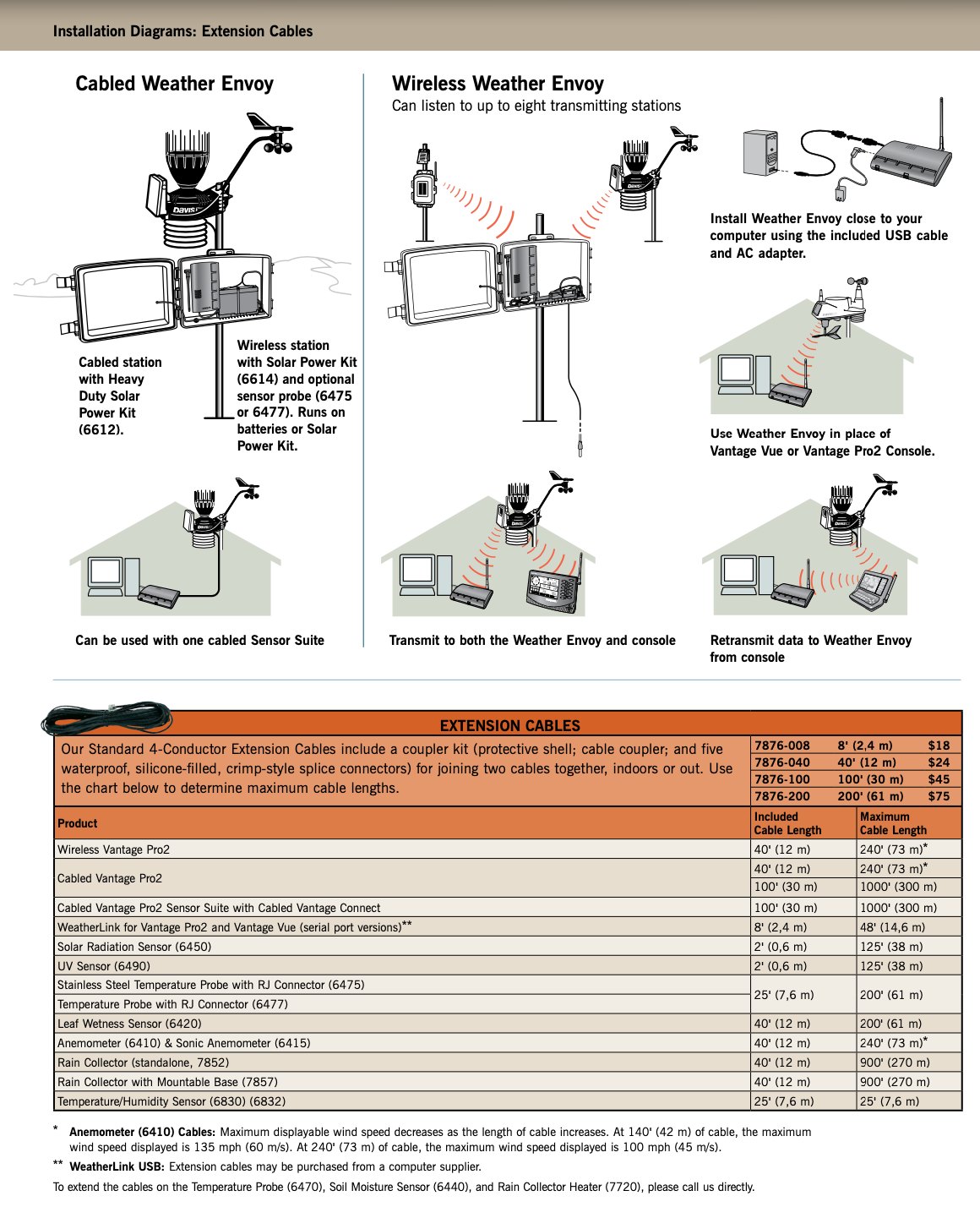 ✅ Not subject to outside RF interference

✅ Radio transmission regulations do not apply

❌ Data cable subject to wear and weather damage, as well as physical damage from animals or equipment