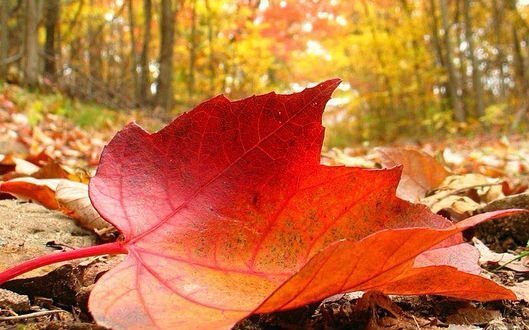 It is easy to understand why many people would list autumn weather as their favorite time of the year. Although by outward appearance, Nature seems to simply be preparing for the big sleep of winter, there is a lot going on during the autumn months.

In agricultural communities, autumn is the season of harvest.

The crops have been tended since planting in the spring, irrigated and cultivated through the long, hot summer, and it is finally time to enjoy the fruits of those long months of labor. Many of the great fall festivals, like Oktoberfest in its many forms and the American Traditional Thanksgiving Feast, are harvest celebrations.

On the sporting front, all those summer evenings spent cheering for your favorite baseball club eventually climax in the Fall Classic of the World Series, and Football stretches from the sweaty, dehydrating workouts of training camp in the late summer, through the autumn weekends, and will have its dramatic wrap-up during the first cold of the early winter. For outdoor sportsmen, the wildlife who gave birth has had all winter to grow healthy on the abundant plant growth through the summer months and is now at its fattest and healthiest stage of the year. Most deer species go into the rut during this time of year when the healthiest males are best equipped to pass their genes to the next generation. This time of year while the whole game animal population is at its peak of health when hunters go into the woods, hoping to harvest a freezer full of meat for the lean months ahead.

Autumn is a time of transition between the warmth of summer and the cold of winter, which makes the concept of Indian Summer all the more precious. European immigrants named the phenomena for the North American Indians whose land they were settling, elsewhere it is known as “altweibersommer” (Old women’s summer), or “gypsy summer”. Although The Old Farmer’s Almanac has tried to tie Indian Summer to the calendar, saying “If All Saints’ (November 1) brings out winter, St. Martin’s (November 11) brings out Indian summer,” the condition is better described as a period of warm weather which occurs after the first hard frost of the season. While the killing frost signals the end of the gardening season, it also triggers a number of other seasonal biological changes.

The drop in daily average temperature we notice in the autumn is a result of shortening daylight hours. This occurs because the axes upon which the planet Earth spins is set at an angle relative to the path the planet travels around the Sun. At the Winter and Summer Solstice, the South pole (during the Northern winter) or the North Pole (during Northern Summer) is pointed directly at the Sun at a tilt of 23°. At the Spring and Autumnal Equinox, the tilt is perpendicular to the Sun.

The tilt away from the Sun as the Sun moves from Autumnal Equinox to the Winter Solstice is the reason for the shorter daylight hours and shorter days also mean that the Sun does not have as long to heat the Earth’s surface.

Many people say that the Equinox is the beginning of autumn, but when you begin to see the signs of fall will depend on upon conditions in your local region. The days actually begin getting shorter after the summer Solstice, the longest day of the year, and when you see the signs of autumn will depend upon how far North you are as well as your elevation above sea level.

One important phenomenon associated with the change in the color of fall foliage. Although many plants simply die with the coming of winter, deciduous trees have evolved a strategy of dropping their leaves and going into a dormant state until spring. When the spring brings more sunlight and higher temperatures, new leaves filled with chlorophyll provide energy for the tree to flower, and grow fruit and seeds, as well as woody growth as the tree increases in size. At the end of the growing season, rather than spend the energy to keep the leaves alive the tree simply lets them die and fall off, knowing that newer, stronger ones will grow in the spring.

The spectacular yellow and orange hues we associate with autumn are actually present in the leaf all the time in the form of carotenoids. These compounds are masked by chlorophyll. The deep green of the chlorophyll is used to convert water and carbon dioxide into the simple sugars which feed the tree. As daily temperatures drop, the veins in the leaf which carry water to the chlorophyll are blocked, and as the green fades, the carotenoids become visible. Other colors, such as reds and purples, occur as the sugar-making process, which requires a great deal of phosphate, breaks down. As the phosphates break down, pigments called anthocyanins are formed. These are the same pigments that are present in cranberries, red apples, blueberries, cherries, strawberries, and plums.

One commonly accepted sign that autumn is coming to a close and that winter is about to arrive is the first heavy snowfall of the season. Like the other signs of autumn we have discussed, snowfall depends upon several factors, including how far north a certain location is, the altitude, and the weather patterns that particular year. Snow is made up of individual crystals of frozen water and most precipitation throughout the year begins as snowflakes.

When water vapor in the air rises through the atmosphere, the vapor and the air carrying it cool with the increase in altitude. When the temperature drops to the dew point, the moisture begins to condense on dust particles carried in the air.

As the air continues to rise and the temperature drops further, the super-cooled moisture clinging to the particle begins to crystallize. The crystalline structure of the snowflake means it will be relatively light for the space it occupies, but eventually, enough ice will form that the flake will begin to fall toward the earth.

For most of the year, as the flakes fall they go through warmer air causing the ice crystals to melt. The melted crystal will usually continue to fall as liquid rain, although during a thunderstorm it may be blown several times back to a higher altitude where it refreezes to form a hailstone. During the late autumn and winter months, the entire air column is often cold enough that the frozen water remains in crystalline form until it reaches the ground. Since the crystal is so light compared to a denser water drop, the flakes may be blown by the wind into drifts. The longer snow sits on the ground without melting, the denser it becomes as the crystal is crushed by its own weight and the weight of the snowflakes on top of it.

The presence of snow contributes to the coldness of the territory since the energy from the sun during the shorter daylight hours in late autumn weather is reflected away rather than absorbed by the underlying ground.

Travel in the months between the heat of summer and the bitter cold of winter has its own cautions and considerations. Motorists especially need to keep in mind the shortening of daylight hours. Twilight comes earlier, and one of the effects of Indian Summer is an increased haziness due to high atmospheric pressures and the lack of wind. This can play havoc on a driver’s visibility.

As the days get shorter the ground absorbs less heat from the sun, and overnight temperatures can drop to the dew point earlier, and continue to fall until the frost point. Road surfaces that have not been cleaned may have a slight covering of oil and dirt, and combined with frosty conditions can make traction questionable in the early morning hours. Crossing mountain passes this time of year calls for extra caution and planning because of the danger of a sudden snowstorm.

For centuries of human existence, autumn has signaled the need to be prepared for the coming winter. Crops had to be harvested and stored, hunters needed to gather and process meat, and individual homesteads needed to put in a supply of firewood to get through the winter. The same attitude should be part of an autumn traveler’s plans. During the hour before and after sunset, try to stay off the road when visibility is at its worst. Keep supplies in your vehicle in case you become stuck, in fact, carrying some extra snacks is a good idea for air travel as well because a late autumn blizzard at one hub can affect the entire system.

Everyone Talks About the Autumn Weather…

The dog days of summer inevitably give way to the darkness and cold of winter, just as winter fades into the glorious rebirth of spring. A terrific way to appreciate the progression of the seasons is to observe your local conditions using weather-measuring instruments. Mounting a weather station sensor suite outside is a simple addition to your other autumn weather chores, and being able to track daily conditions as they change can be a lot of fun. As winter approaches and you are better used to watching conditions, you will be better able to predict weather changes that will affect your family and their safety. You can even make your station part of a personal weather station network which will help to predict storm patterns and tornado conditions.

A home weather station like the AcuRite 01024 Pro Weather Station system gives your family scientific-grade instrumentation which can be connected to your PC and the Internet. The sensor suite is relatively simple to set up, and a wireless connection to the base station means that it will be effortless to connect. The Oregon Scientific WMR200a is a more expensive yet classic, versatile, and expandable system that can grow with your interest in weather monitoring. The separate sensors mean more complexity in setup but allow for easier maintenance and more accuracy in readings.