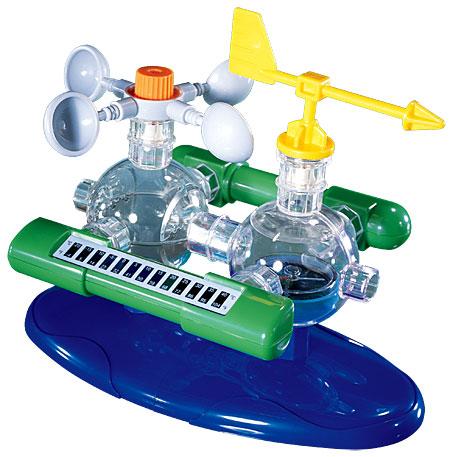 In this section we will discuss weather instruments:

The best way to know what the weather is doing is to step outside and feel it for yourself. Weather Measuring Instruments by themselves cannot tell us if it is a nice day, but they will measure the things that make the weather enjoyable or miserable. In this discussion, we will explore how both digital/electronic and traditional analog instruments function.

Calibration is an important concept to understand with any weather measuring instruments.

This is very important if weather data is being shared over a weather station network like WeatherUnderground or the National Weather Service, but it is also reassuring to know that the instruments in your home weather station are accurate. Highest quality weather instruments are calibrated to NIST (National Institute of Standards and Technology) and the calibration can be tracked for the life of the instrument.

Thermometers are probably the most familiar weather instruments. Many homes have a thermometer or two mounted outside, and it is not uncommon for public buildings to have a temperature display incorporated into their signs.

Thermometers measure temperature, of course, but they do not always tell the full story when it comes to “how hot is it today?”

Measuring comfort seems subjective, but heat index and wind chill can be very useful for understanding human performance as well as comfort. Air temperature is just one element of these measurements, but it is a very important one.

If you are looking for simple and reliable temperature gauge that also show the comfort check our top pick from ThermoPro TP50 . Any gauge from your local store will also do a decent work, however the accuracy depends form brand to brand and instrument to instrument.

Digital temperature gauges include thermocouplesand thermistors. A thermocouple is similar to the bimetallic element of a dial thermometer, except that rather than turning a dial as a result of temperature changes, the two metals in the element create an electrical charge that changes according to temperature.

Thermistors are a type of electronic resistor made of metal oxides encased in epoxy or glass. As temperature changes, so do the electrical resistance of the device, which can be measured and displayed.

Wind direction and speed are measured by wind vanes and anemometers. Knowing the direction the wind is coming from is important in predicting the sort of weather it will bring with it.

Traditional wind vanes are a common sight commonly seen on barn-tops and chimneys. They are mounted on the highest spot available so as to read wind direction without interference.

They consist of a pointer and a flat vertical material mounted behind a pivot point. As the wind acts on the flat element, the pointer points in the direction the wind is coming from. When mounting a wind vane, especially an electronic one, it is important to use a compass to ensure the instrument is mounted in relation to true north.

Mechanical Anemometers are instruments that measure wind speed. They take their measurement by counting the rotations of the shaft over a period of time. Cup anemometers have a vertical shaft with three or four hemispherical cups mounted on arms perpendicular to the shaft. Three cup anemometers are considered more accurate because there is less interference.

Propeller or vane anemometers have horizontal shafts with a propeller mounted on the end. The propeller itself is intrinsically more accurate at sensing wind speed, but must be held directly into the wind, so the unit is often incorporated into a wind vane. The advantage of the cup type anemometer is that it will sense wind strength from any direction.

Kestrel 5500  one of the best Wind Meters on the market

You can also teach your kids how to make a DIY Anemometer at home. It’s really fun and easy. Watch this “How to make Anemometer” video.

Also check: 5 Wind Meters for Long Range Shooting Worth Checking Out in 2018

Wind-chill is a measurement of relative comfort. Cold weather “feels” colder since moving air removes heat from a body faster than still air. There are charts and formulas for measuring wind chill at various temperatures and wind speeds, but most electronic weather stations which have an anemometer and a temperature gage will derive wind-chill from installed software.

Atmospheric or barometric pressure measurements are helpful in predicting weather. Generally steady or rising pressure indicates fair weather while a falling pressure means a storm or foul weather is approaching.

Barometers are the instruments used to measure atmospheric pressure.

The earliest type of barometers were the liquid type. This instruments air made by drawing liquid up into a clear (glass) tube and sealing the top of the tube. The liquid is held in the tube by the vacuum created in the top portion. The open bottom is placed below the surface of an open reservoir. As air pressure increases, the liquid in the tube rises.

A more common mechanical barometer is the aneroid type. These operate by comparing pressure between the inside and outside of a sealed “can”. The can has a flexible top that will flex in or out as the outside pressure changes. A very simple aneroid barometer can be made at home by placing a rubber diaphragm over a jar.

Electronic pressure readings used by most home weather stations (and some Smartphones) are taken by a piezoresistive strain gauge. These devices have the advantage of being extremely sensitive and accurate in a small size.

Humans regulate their body temperature with the evaporation of sweat. As humidity increases, evaporation of the sweat on the skin is less effective. This is the basis for the “heat index”, which measures how hot it “feels” at different temperature and humidity levels. Human performance, health, and comfort can be compromised at high heat index levels.

Measuring humidity is done with an instrument called a hygrometer. One type of analog hygrometer is a psychrometer, which consists of two thermometers. One thermometer is kept dry while the other has a moist fabric over the bulb. A

s the moisture in the fabric evaporates it cools the thermometer relative to the dry temperature and comparing the two readings give relative humidity.

Electronic hygrometers are usually of the capacitance type. The sensor has a polymer layer which absorbs moisture from the surrounding air, which changes the device’s capacitance. Most electronic weather stations mount the temperature gauge and the humidity gage near each other and use software to calculate heat index and dew point.

Analog Rain Gauges are among the most simple of all weather instruments to understand. Rainfall is measured by the amount of participation to fall over a certain area. Thus, all a rain gauge needs is a straight walled vessel with an open top. It can be as simple as a tin can placed on level ground. The disadvantage to such a simple instrument is that the observer needs to check it personally on occasion, measure the amount of liquid inside, and then dump out the water.

Electronic rain gauges measure rainfall amounts using a self-emptying tipping bucket sensor. The device consists of a funnel which directs rainfall into the bucket assembly. The bucket is divided into two chambers on either side of a teeter-totter mechanism. As the upper chamber fills, the bucket tips and that chamber spills its contents while the next chamber fills.

Every time the bucket tips, an electric switch is closed, and rainfall is measured by counting the number of times the connection is made.